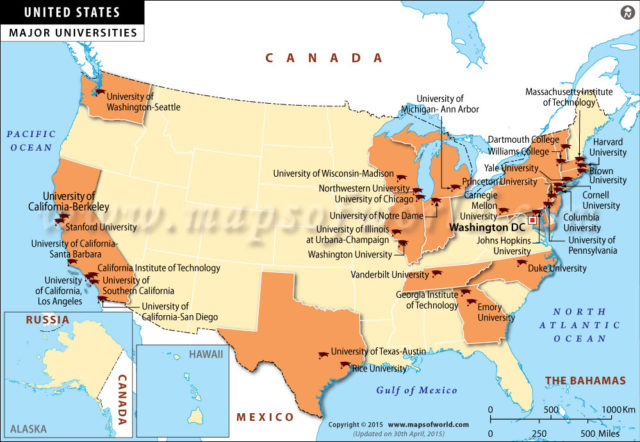 1. Stanford University, California
Stanford University was founded in 1885 by Jane and Leland Stanford in memory of their only child. The University’s pristine campus, one of the largest in the United States, is located in California’s suburban Bay Area some 30 miles from San Francisco. The University is home to a wide range of student organizations such as the Stanford Pre-Business Association and the Stanford Solar Car Project. The university has three academic schools and four professional schools. It is one of the top fundraising institutions in the country. Its faculty and alumni have founded a number of companies which earn over $2.7 trillion in annual revenue. It is the alma mater of a number of US Congress members, astronauts, billionaires, Turing Award and Nobel laureates.

2. Williams College, Massachusetts
Williams College is a private liberal arts college founded in 1793 with funds from the estate of Ephraim Williams. It is located at Williamstown in Massachusetts and is one of the oldest colleges in the country. The school’s traditions include a Mountain Day in October every year when students hike to the nearby Mount Greylock. Williams College has three academic branches which are languages and the arts, social sciences, and science and mathematics. It has small class size and Oxford-style tutorials which rely heavily on student participation. Its students are known for academic and athletic skills.

3. Princeton University, New Jersey
Founded in 1746, Princeton University is among the oldest colleges in the United States. It is located in the quiet suburban town of Princeton in New Jersey. The University campus has on offer a number of events, activities and organizations apart from a thoroughly engaging academic environment. Its old-world ambiance is especially perceptible in the Nassau Hall, which was the temporary capitol of the United States in 1783. This Ivy League institution is one of the best research universities in the world with connections to more than 40 Nobel laureates, 17 National Medal of Science recipients and five National Humanities Medal winners.

4. Harvard University, Massachusetts
Harvard University was founded in 1636. It is located in the city of Cambridge in Massachusetts close to Boston. Its huge library system is home to the oldest collection of books in the United States which also happens to be the largest private collection in the world. However, if you think Harvard is all about diving deep into books only, you’re thoroughly mistaken. The University athletic teams compete in the Ivy League and the Harvard and Yale football teams are old rivals. The on-campus residential housing is an intrinsic part of student life at Harvard.

5. Massachusetts Institute of Technology, Massachusetts
Established in 1861, the Massachusetts Institute of Technology (MIT) is an independent, private research university based in Cambridge, Massachusetts. The five different schools of MIT are engineering, humanities, arts and social sciences, management and science besides architecture and planning. The university is connected to as many as 85 Nobel Laureates, 58 National Medal of Science recipients, 45 MacArthur Fellows and 29 National Medal of Technology and Innovation winners. Scientific and technological advances attributed to the MIT include the first chemical synthesis of penicillin, development of the radar, discovery of quarks, and invention of magnetic core memory, which paved way for the development of digital computers.

6. Yale University, Connecticut
Yale University is a private Ivy League research university located in New Haven, Connecticut. Its history goes back to 1701 when it was founded as the Collegiate School in Saybrook, Connecticut before moving to New Haven 15 years later. It was renamed Yale College in 1718 in honour of Welsh benefactor Elihu Yale. In 1861, it became the first university in the US to award a PhD. Yale’s main campus spans 260 acres of New Haven and some of its buildings date back to the mid-18th century. The university comprises 14 schools covering humanities and arts, sciences and social sciences. Students are also trained in quantitative reasoning, writing skills and foreign languages.

7. Pomona College, California
Pomona College was founded in 1887. It is one of the United State’s premier liberal arts colleges. It’s based in Claremont, California, 35 miles east of downtown Los Angeles. The campus area spans 140 acres and its proximity to the foothills of the San Gabriel Mountains provides a suburban setting. Since Pomona College is not very far from Los Angeles, students here have great opportunities for substantive internships in a wide range of fields, including media, science and law besides community involvement and outdoor activities. Pomona nurtures a diverse yet close-knit community of skilled scholars, scientists, artists and entrepreneurs passionate about making a difference in the world.

8. Brown University, Rhode Island
Brown University was founded in 1764. It is located atop College Hill in Providence, Rhode Island. The University has a college-town feel with the nearby Thayer Street serving as a hub of activity. The University men’s soccer team ranks among the top 25 teams in the nation. All students at Brown are required to live on campus for their first six semesters. Students can pursue their interests by taking part in any of the 400 student organizations on campus. The University features a small but vibrant Greek community.

10. Swarthmore College, Pennsylvania
Swarthmore College was established in 1864. It is located 11 miles southwest of Philadelphia and has a campus area spanning 425 acres. The school was founded by members of the Religious Society of Friends (Quakers). However, it does not owe any religious affiliation today. The school offers over 100 organizations that students can take part in on campus. Unlike most other liberal arts colleges, Swarthmore offers an undergraduate engineering program as well. Some of its notable alumni include NASA scientist Nancy Grace Roman whois hailed as the “mother of the Hubble telescope”; former Massachusetts governor Michael Dukakis and former president of the World Bank Robert Zoellick.