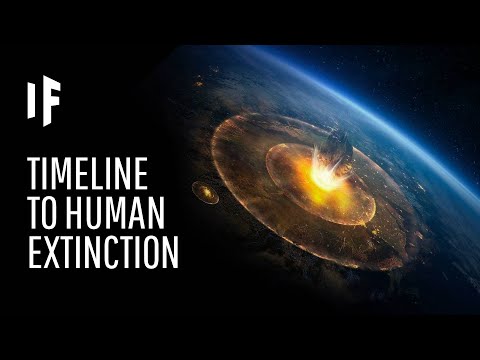 Within the vastness of the universe

Humanity… is not that big of a deal

We’re not here because we’re meant to be here

If mathematical predictions are correct

What would be the cause of our extinction? what would we do if we knew exactly when our existence would come to an end? and could we delay the inevitable?

Or even leave the planet to itself altogether

On April 13th, 2029 the near-earth asteroid named Apophis will pass within 301,000 kilometers of our planet

That’s ten times closer to Earth than the moon is

And even closer than some satellites in orbit, But this 370-meter wide asteroid won’t hit the earth

Instead, it will sweep by safely and continue its path around the Sun

The global population would grow to about eight and a half billion and reach a crisis point. The world’s ecosystems would change faster than we’ve ever seen before due to increased levels of co2 Up in the Earth’s orbit

Everything from spent rocket stages to debris from accidental collisions

Would create a wall of space junk

It would be problematic for any spacecraft to leave the Earth, We’d have to find ways to clean up the upper atmosphere if we didn’t want to be trapped on earth forever

If humanity managed to solve the space junk problem.

We’d start establishing the first lunar basis and that would mark the beginning of the permanent human presence outside of earth.

On earth, the global average temperature would rise by one and a half degrees surpassing the safe limit, Even though humanity completely switched to clean energy sources global warming would become catastrophic and hard to control.

Due to warmer global temperatures, the Great Barrier Reef would lose up to 90% of its corals

The Amazon rainforest would largely be destroyed by wildfires and deforestation

Even after decades of conservation efforts, at least 1 million species in the wild would begin to go extinct

This would be the beginning of the next mass extinction event in the Earth’s history.

Although this time it would be caused by humans.

The Earth’s population would grow to 10 billion people

Extreme weather would rampage around the world, Africa the Middle East and Southeast Asia would be most affected by floods, hurricanes, and droughts

Parts of the planet would become uninhabitable

Large-scale evacuations and resettlement programs would be needed along the coastlines, costing humanity trillions of dollars in the process Because of the declining fertility rate and the significant number of casualties from environmental conditions, Earth’s population would stabilize at 11 billion people

By the 2180s humanity would start expanding into the solar system

Mining asteroids and terraforming Mars would be underway

More people would have access to space technology and a new form of terrorism would emerge, It would be possible to hijack a spacecraft and use it to redirect asteroids towards the earth the Moon and Mars

Spaceships powered by antimatter propulsion would take humanity outside the solar system, Automated unmanned probes would be sent to the far regions of the galaxy

researching thousands of interstellar worlds, By the end of the 23rd century

Humans would have confirmation of a microbial alien life existing on a warm wet, Exoplanet within a hundred light-years of our solar system

Decades of nanotechnology research and advancement would result in transforming the general public,into trance humans or cyborgs

Transhumans would have improved intelligence and strength, Among many superhero traits they would be able to sprint at very high speeds

Become invisible or even transform their appearances at will

Humanity would level up from a type 0 to a type 1 civilization on the Kardashev scale,

They would already be able to control the weather and global climate Alter, the course of earthquakes and build cities at the bottom of the ocean, The next step would be developing ways to fully manipulate the sun’s energy.

The chain of the previous events could lead to humanity completely disappearing from the Earth one way or another, We might end up moving to space colonies we had established, or it may not even be us anymore

But a new biotechnologically engineered species, Of course, this is a rough timeline, estimated by futurists based on statistics and mathematical models if You’re upset about humanity’s coming extinction. Remember that it only has a 50% chance of coming true, Scientists calculated our date of extinction using the same formula that Marketers use to predict what product you might click on online or who you’re going to vote for.

It’s about probabilities, not guarantees, Besides other predictions tell us that we would face extinction, not 760.. but 10,000 years from now

In that case, we’d be around long enough to see the Earth’s poles reverse around the Year 3500.

And computers reaching their ultimate potential sometime after the year 4000, But how would knowing all this in advance change the way we live our lives?

Well, if we knew the date of our extinction with 100% accuracy, we could stop caring about our environment and our bodies, We might focus on all the bad habits that only bring us short-term happiness.

We could start looking for other places to move to beyond what our own solar system has to offer.

We could establish colonies with stable human populations,

humans would continue to exist

But that’s a story for another  USA What-If